The Knights of St. John International is a semi-military, Roman Catholic, Fraternal Order for Catholic gentlemen from the ages of sixteen and fifty five years (or older where application is for social or honorary members) and is a practicing Catholic.  Members can opt to be a part of the Uniform or the Non Uniform Rank.

The Uniform rank is established at the Local Commandery level, and, depending on the number of military members, is led by a Commander and one or two Vice Commanders. These officers are elected and only members of the military rank can elect and hold offices. The civil offices of the Commandery, with an elected President, Vice President, Secretary, etc, are separate enitites and elected to office by the entire Commandery, uniformed and non-uniformed alike.

The Commander of the local Commandery has the authority to promote any and all of his “enlisted rank” members ( Private 1st  Class, Corporal, Sargent up to Sargent Major). These ranks can be identified by their specific military sleeve designations, as well as the uniform itself which is trimmed in white with silver buttons. Their plumed chapeaus will be adorned in white ostrich feathers.

Commissioned officers military ranking can be found on their shoulder boards, the uniforms are trimmed in gold, with gold buttons and their plumed chapeaus will be adorned with black ostrich feathers.

As the military member seeks office in levels above the Local Commandery, he is able to rise to greater military rank as an officer at the District, Grand and Supreme level, from 2nd Lieutenant as far as a four star General.

The military member also has a choice of two uniforms. The original”Full Dress” Military Uniform is styled after the 1880 Union Army uniform in existence when the Order was formed. The option is the 1998 Blue Marching Uniform. Both are acceptable and recognized as our military uniform.

Our only approved vendors are listed on this page, licensed to use our trademarked property to create uniforms and accoutrements in accordance with the Supreme Constitution.  There are no approved vendors outside the U.S.  Overseas Knights must take care to purchase uniforms and equipment that conform to the Supreme Constitution of the Knights of St. John International, and not to bear insignia or accoutrements which may be appropriate to certain branches of civil or military service but not to our unique uniforms.  Many Knights who are vested in the Marching Uniform are wearing embroidered shoulder boards, many of them quite large, bearing their rank insignia.  These are fanciful articles and must be discarded in favor of the shoulder strap design as specified in the Supreme Constitution.  Illustrations of the proper shoulder straps will be found in the Siegel’s Uniforms catalogue.  It would require a Constitutional amendment to approve any change of any sort to our uniforms or insignia.

Chapeaus:  New London Regalia offers for sale embroidered rosettes and plume replacements for the 1880 chapeau; they can perform the labor of replacing rosettes and plumes on your chapeau, or you can purchase these items and replace them yourself.  Changes from Sir Knight to Officer status will require a change of silver to gold embroidery and/or white to black plumes.

Examples of Military and Marching Uniform 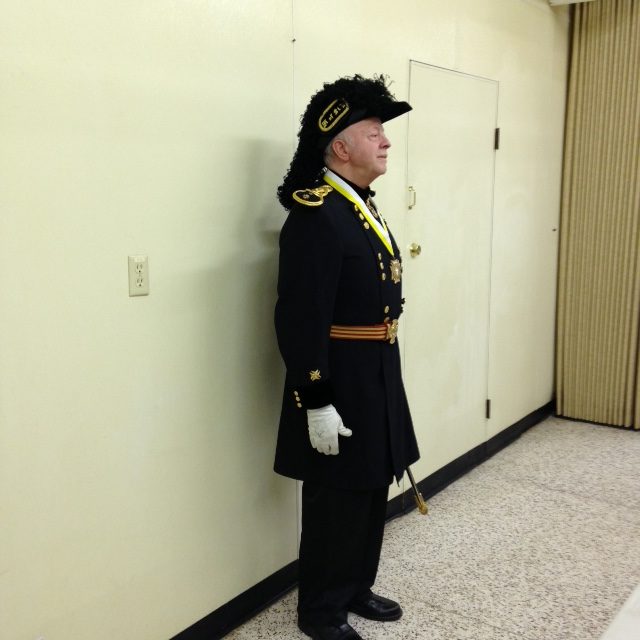 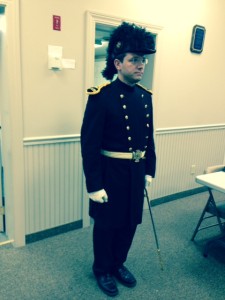 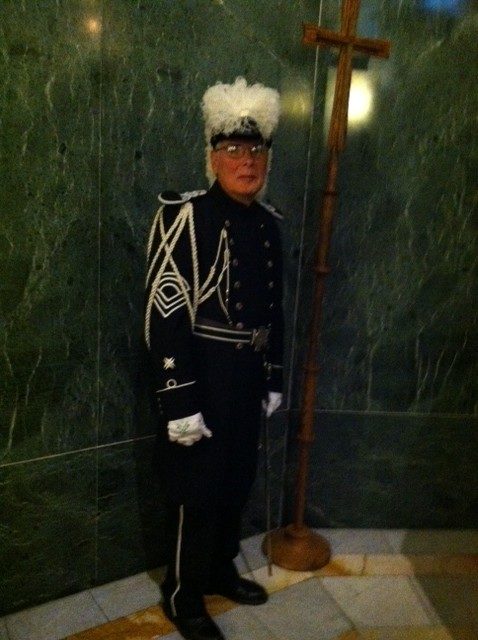 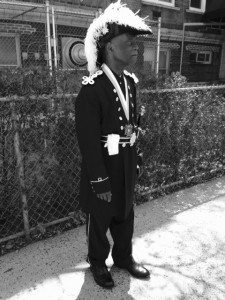 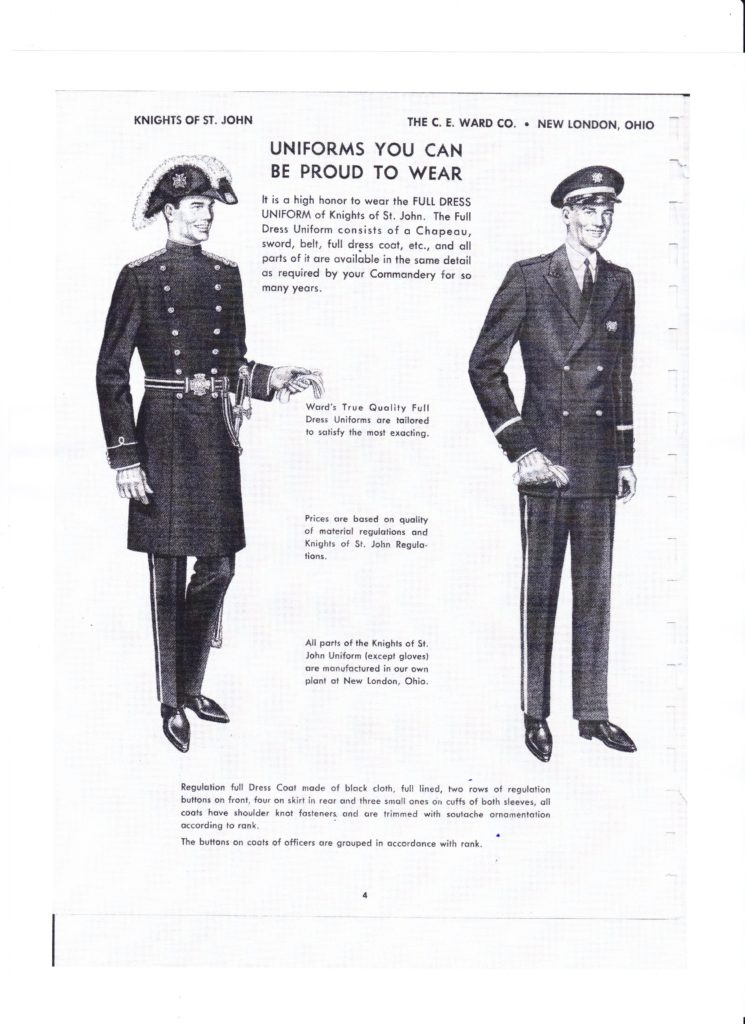 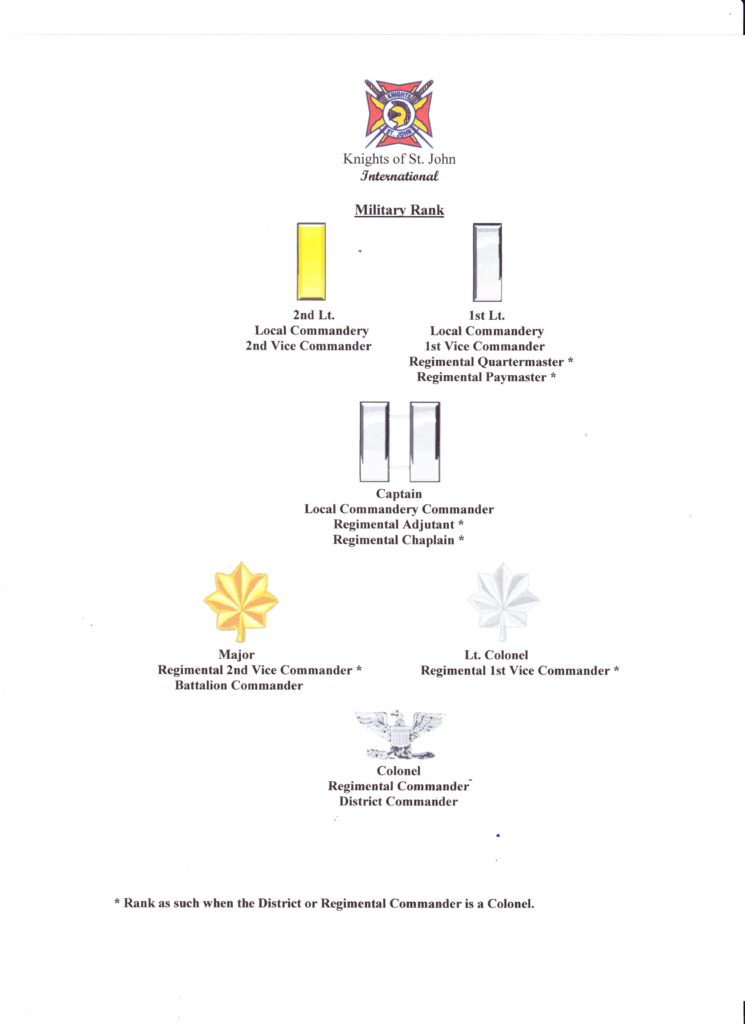 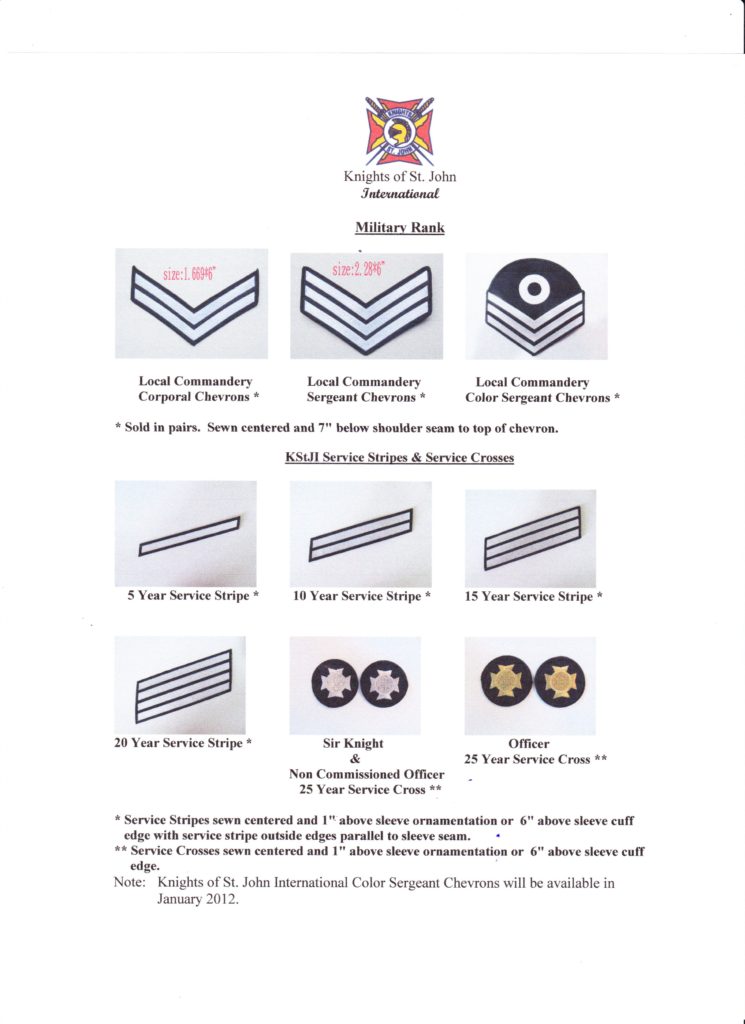 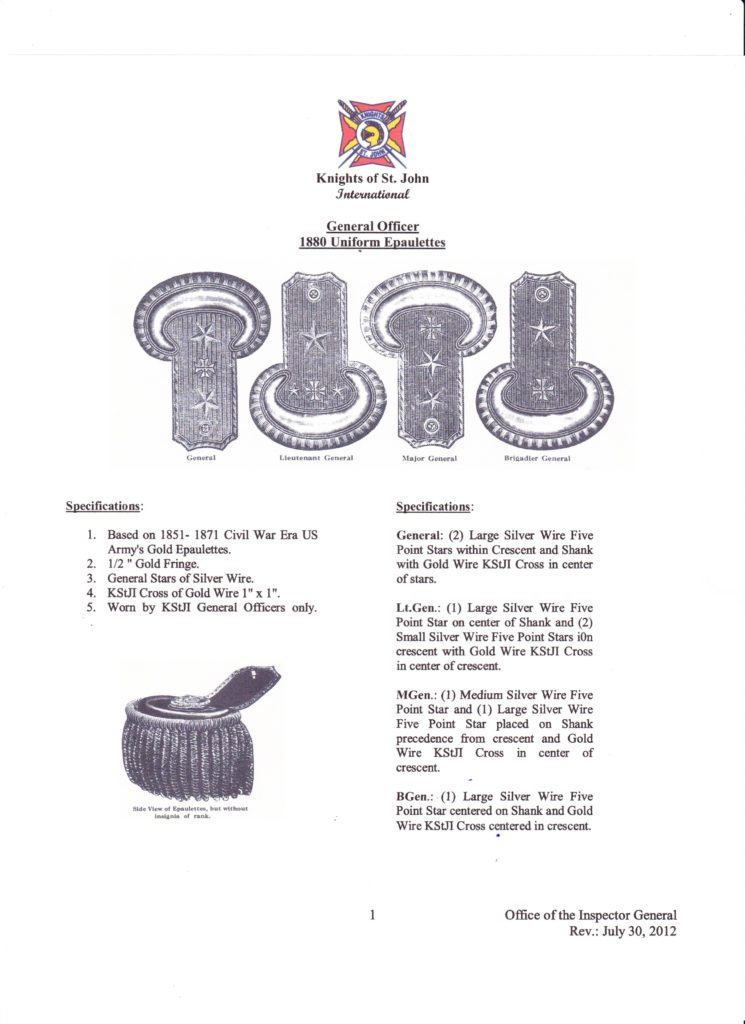 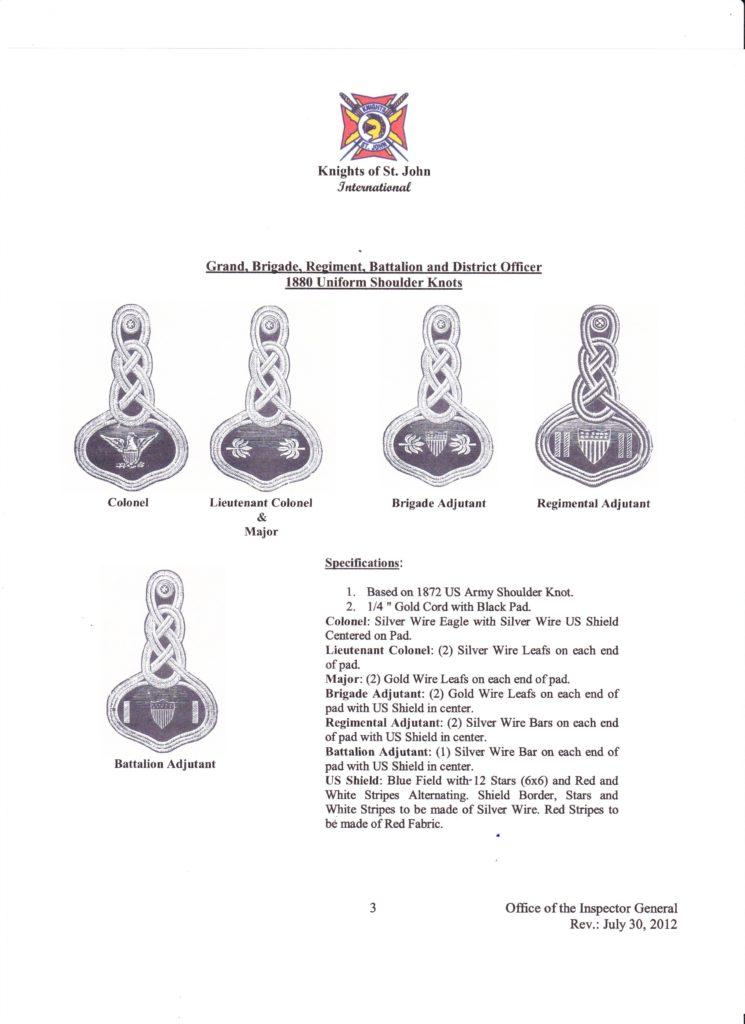 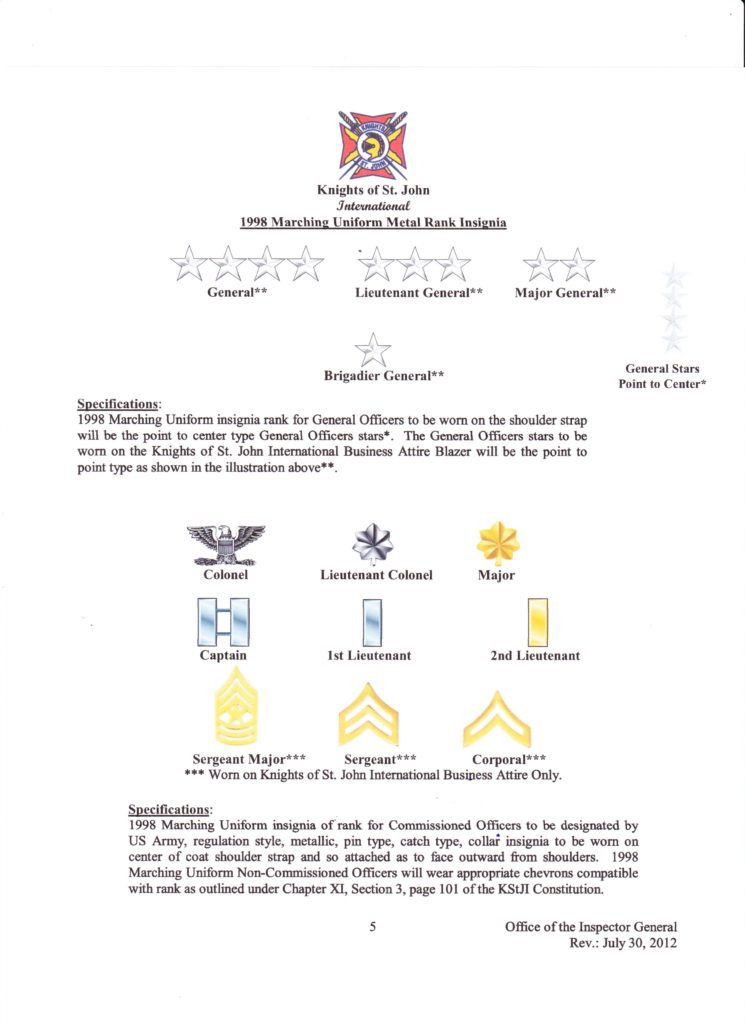 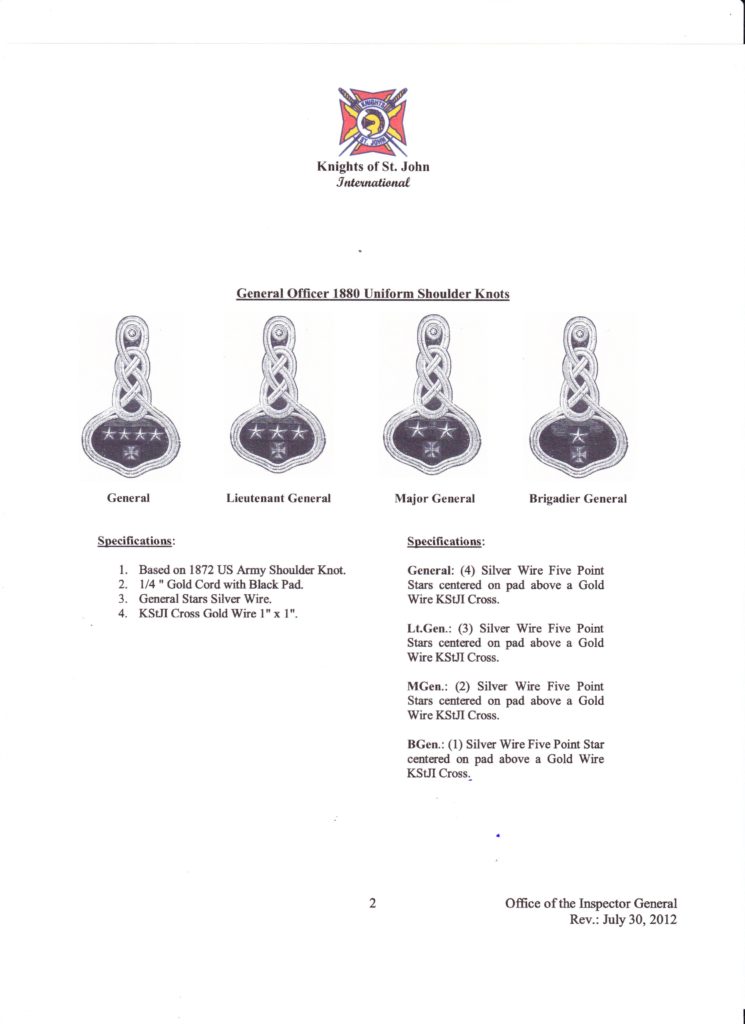 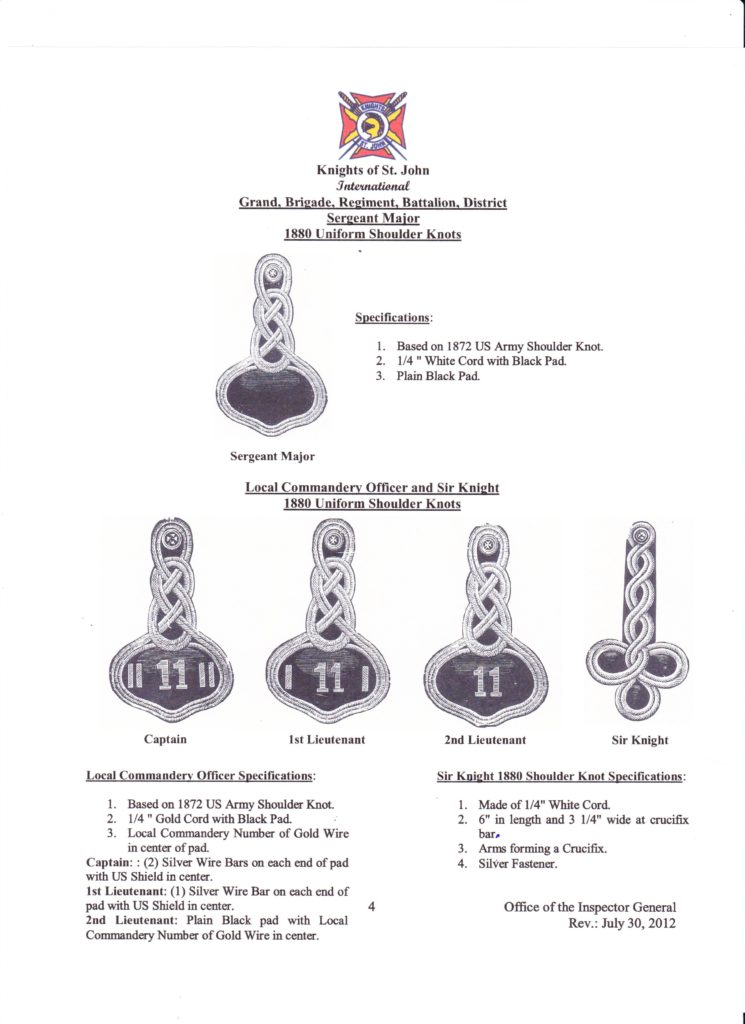 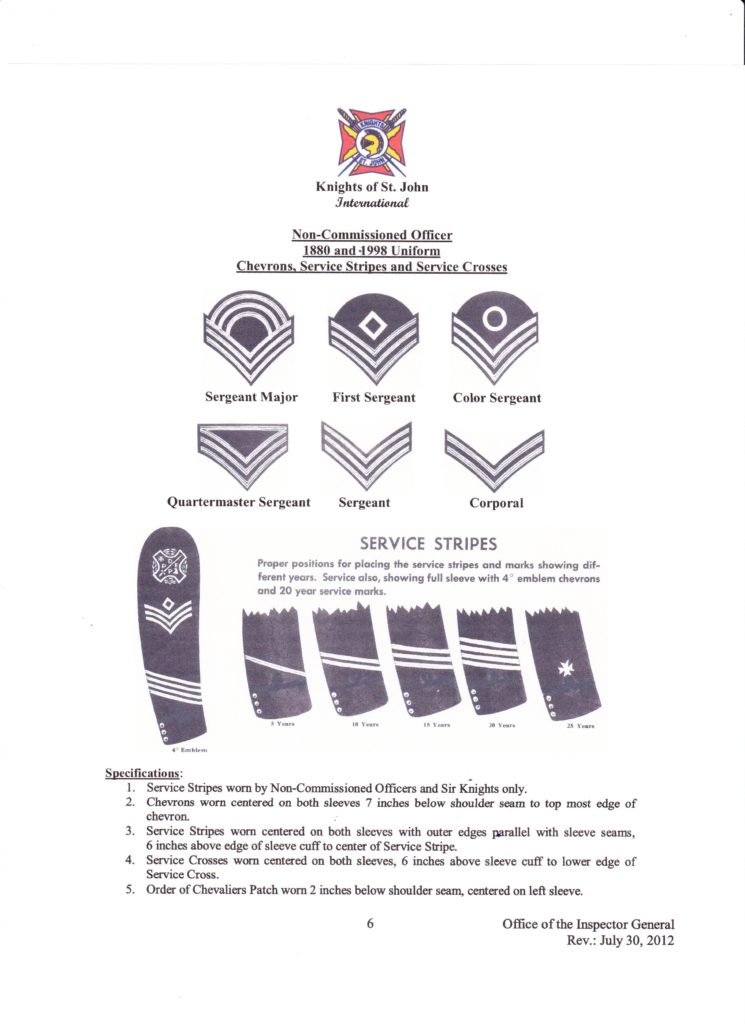 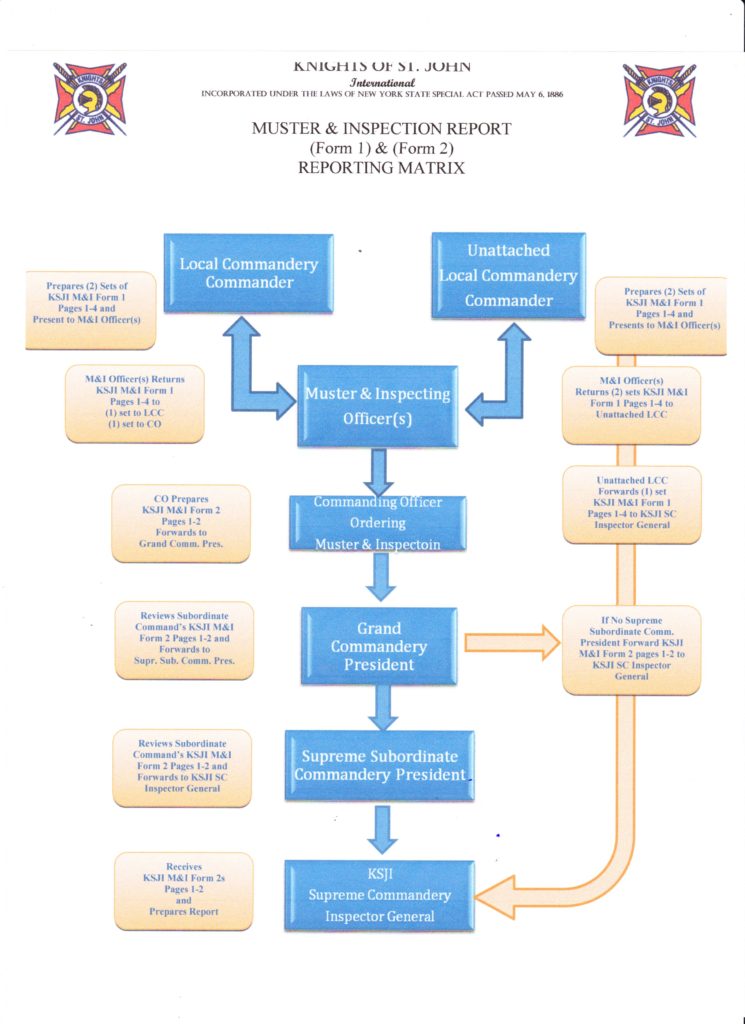 For the 1880/Full Dress uniform-jackets, trousers, shoulder knots and epaulets:

The Quartermaster Shop has stopped taking orders for

More information will be posted when it is available.